I am sitting here at 10:30 PM right now, looking out the window to Paul’s Mom’s tire factory, and I still see people working. These workers will work almost all night with the rubber. Early today we had a tour of the factory from the Head of Technology. We got to see everything that went into making the inner tubes, and understand more about the factory’s relationship to other countries. Before I even walked into the main floor I could smell the rubber, and it only got stronger as you went into the factory.

When I walked in, I saw the people working non-stop in these hot and noisy conditions, where it gets up to 107 degrees in some rooms, to produce the best product they can. I thought a little about what it would be like to be in their shoes and frankly, I can not imagine doing it. They work for ten hour shifts with only a couple breaks. Now I know I’m making it seem like these are horrible conditions but this factory has some of the best, safest, most efficient working conditions out of the factories in China.

This factory treats their workers very well, especially compared to other factories in China. For example, the food that the workers eat is not the worst but it is also not the best. There is not any complaining from the workers about the food, and they actually like most of the food that the kitchen prepares for them. In return, the factory asks (through motivational signs and posters) that the workers repay them by doing hard work and producing the best rubber for the inner tubes. Paul translated one as: “A quality worker is a quality tire.”

Back to how the rubber is made, they start with the raw materials that is put into this special machine that combines it all together to make the rubber. It is then put onto these rollers that stretches out the rubber to make it longer and wider, there is a lot of shaping up the rubber after that so they can make it the inter-tube. These machines are very dangerous to work around because of how powerful they are. After all of that it settles down a little bit, the finished product goes into the packing room to be shipped off in country and abroad. In the packaging and shipping rooms, you will not see a lot of men. You will mostly see woman because the factory, as they said in most of China, do not allow women to do any of the lifting and work around the dangerous machines. They also said that the woman have a better eye for detail so they can tell if it is a good tire or a bad tire better then the men could if they worked there.

I was very impressed and interested in the factory and everything they do. It was interesting when the Head of Technology was talking to us about how a long time ago, the U.S. made their own inner tubes and had their own factories. Then they decided that it was too expensive, and that they did not want all of the pollution that the factories created. So what did they do? They exported the pollution to China where there were already factories and pollution, so that they could get rid of it. But they are not really getting rid of it. The U.S. might not be very polluted, but China has become one of the most polluted countries in the world. I’m not sure if the U.S. moving their factories there made that happen, but it sure helped. 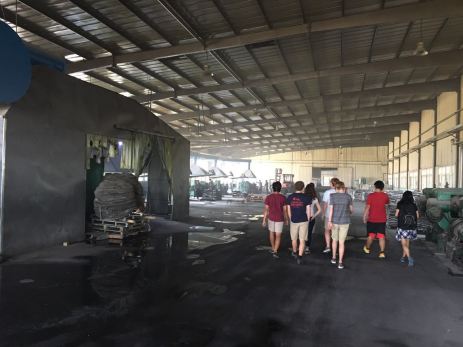 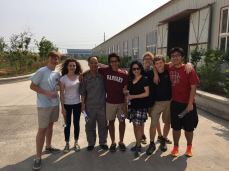 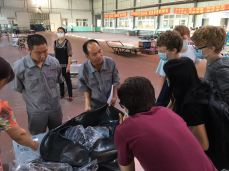 6 thoughts on “Curiosity, a Tire Factory”